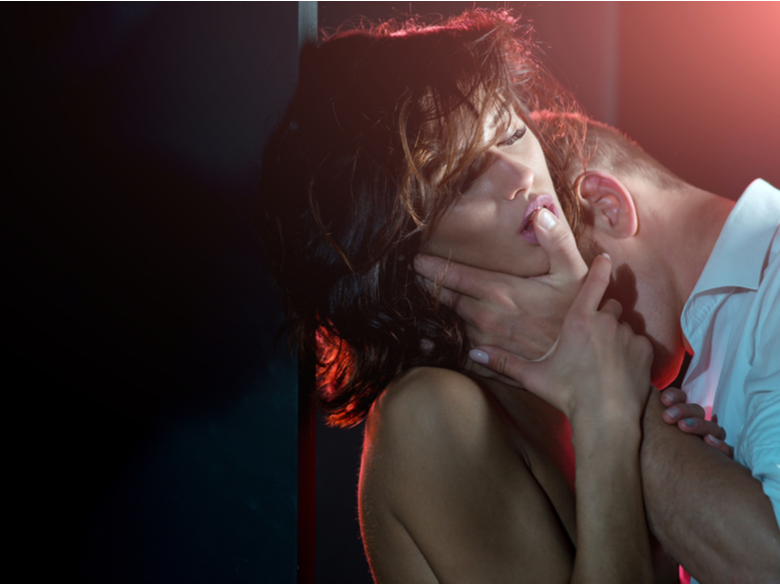 Come for the shoes, stay for the backroom antics

On Sunday afternoons, Ashlie Fox and her sister Becky have a regular routine. As sisters, the two have always gone shoe shopping together. It’s their time to bond and catch up on their daily lives. Becky lives to vicariously live through Ashlie’s stories of her endlessly adventurous life. In return, Ashlie also enjoys hearing about Becky’s day to day routine. She loves to see pictures of her niece and nephew and hear about her job as a Pilates instructor. They always end their shopping sessions at Becky’s flat doing an exercise session.

On this particular visit to the shoe store, Ashlie had picked out a particularly stunning set of heels. They were an eloquent, yet colourful pair of strappy iridescent yellow 4 inch heels with glitter straps.

Becky, giggled a bit as she was trying on a pair of running shoes. Ashlie turned her head and smirked and said “Girl, you know that I have nothing to wear with all my summer dresses that bring out my hazel eyes.”

She laughed and said, “Ashlie Fox, you have more shoes than you know what to do with.” Becky proceeded to call over the shoe salesman.

All they could see, as he was turned around, was a tall man with short, dark brown hair. He had a clean-shaven neck and khaki pants with a black polo shirt on.

He was helping another customer. As he turned around, this is when Ashlie felt her heart skip a beat and her pussy had a variety of sensations shooting through it as well. He had the most incredible big brown eyes she had ever seen. He was in his mid thirties, and obviously the manager.

He lifted up his finger and froze for a moment. Ms. Fox was bent forward. His first glance of this goddess showed her in an off the shoulder black shirt that just peaked at the very top of her breasts as he was trying to see if the stock shoe fit her. They locked eyes and he said “Just a minute, Miss.” She coyly nodded and smiled and continued trying to see if the shoe fit.

He finished up with the customer and checked them out at the register. As he came back, he spied her with the shoe finally on. Her tiny feet and perfectly pedicured toenails nails were freshly painted and it fit like Cinderella. The strapping lad came over and flashed a million dollar grin and said, “Hello ladies, I’m James. My, it looks like you found the perfect size.”

She replied “I’m Ashlie.” He smirked as she looked up at him, noticing that his pelvis region outlined quite a large bulge in his pants.

She had thought she had seen him glancing at her as he rang out the other sale. Ashlie however, was not feeling her usual seductress self nor particularly confident at the time, so she thought it was her imagination. Her long wavy hair was twisted up with tendrils flowing on the sides in a messy bun. She had on an above the knee flowing flower dress that at just the right angle, one could take a peek at her cheeky satin panties.

She swiftly looked back at him, nodded and agreed. “Do you happen to have the other shoe in the back?”

“I certainly do Miss Ashlie, would you like to wait out here while I retrieve it for you, or would you like to follow me so that you can wear them directly out of the store after paying? We are closing in 15 minutes so I need to lock up”

Ashlie thought to herself, “Omg yes, Mr. Manager, take me outback and make me your fuck princess.” She had on some old floppy sandals and felt just maybe he wanted her to follow him back there.
“Yes James, I think I’d like to wear these out today please.” “Follow me Miss.”

James was looking her up and down like a sweet vanilla cone on a hot summer night. He wanted to wrap his lips around hers and make out with her for hours. She could tell he fancied her and was too shy to say anything. As they were getting ready to close, James was going through the shoes and she could just tell he wanted to get her number or get into something far more devious.

She took the risk and went in the way way back to the room where only the employees were allowed. He looked flustered but his bulge in his pants told the whole story of what he wanted. Ashlie hoped. She had one shoe on so she stumbled into the stockroom. She started to slip and felt strong hands catch her on the back of her waist.

“I am so fucking clumsy sometimes sir, I am so sorry.” Both of them were struck with lust. One cannot even say what occurred next in any kind of logical manner. It all became a huge blur of flashes of what happened next.

As he caught her, passion overrode any reasoning. As soon as she could recall being in his strong partially tattooed arms, they were suddenly in a passionate kiss. Their tongues swirling around in a rhythmic dance, in what turned out to be possibly the best kiss of her life. He looked at her after their make out session and said, “ Oh my, I never do things like this, I could lose my job.”

She assured him that she saw him lock the door. Her sister Becky was watching the front for anyone coming in. They were both nervous as the attraction was intense. There were aisles of shoe boxes as well as a stack of pallets covered with a cloth. Ms. Fox led him over there. He quickly grabbed the other shoe.” I want to see both of these on you.” He started to grab the other heel out of the box and started to kiss and lick behind her knees. He then, like a pro, put the shoe on her. This entire experience drove her absolutely wild. The feeling of being ravaged by a sexy stranger in the back of a shoe stockroom was nothing one had ever expected to be on their “bucket list.”

She took her hands and lifted her skirt as he lifted her onto the pallets. He continued to kiss up and down her legs and then started to caress and kiss her feet. She loved this sensation. She began to undo his belt as he slid down her panties. She pulled his boxers down. Partially stripped of their clothing, he could feel his smoothly shaven pubic area and dick against her bare pussy. He pulled her in for another kiss. This time, they engulfed each other’s energy fully and at the same time his tongue entered her mouth, his throbbing member entered her pussy.

Her back pushed against the wall and he had lifted both of her freshly shaven legs and new heels on top of his shoulders. He plunged into the furthest depths of her cunt. “Oh my God.” Ashlie could barely muffle her moans. She knew Becky had her back, so she let one out. He smirked and shoved his dick into her glistening wet hole again much harder. They were still engulfed in a kiss and he pulled away for a moment.

He lifted her off the pallets and swiftly turned her around. He stated that he was still on the clock and it was getting late, and he couldn’t get into the register. Ashlie would have to earn her new shoes now. She smiled and arched her back as he pushed down on it and grabbed her messy bun. He tugged it back and forth as he thrusted deeply into her tight young pussy. He had a tall and astoundingly built tan body with perfectly coiffed hair. She would look back every so often as his eyes entranced Ashlie. He would smile and yank her hair and thrust harder. He kept taking peeks of her tight ass shaking up and down doggy style as she would coyly ogle him back.

They both laughed and started to get dressed. He told her how amazing that felt and that he worked next weekend. He asked if she would be back to get more shoes. Ashlie shyly looked at him and said, “I would say you have my customer loyalty now, Mr Manager.”