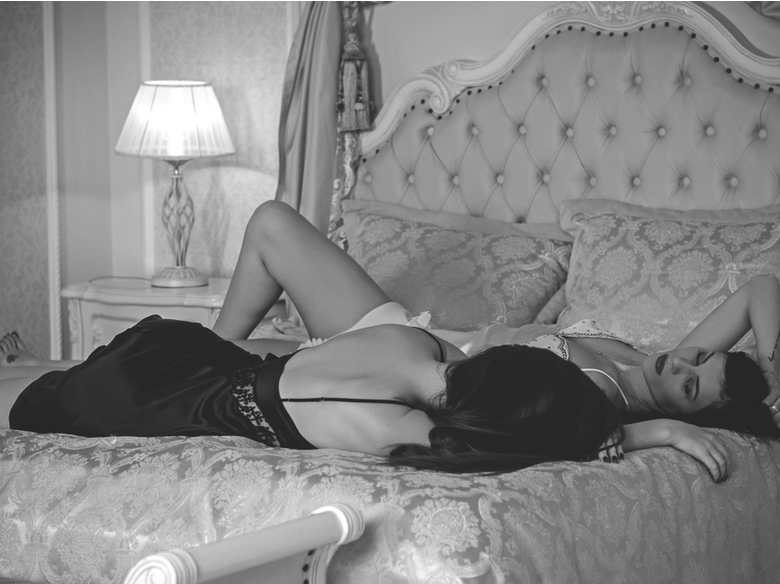 Victoria wanted to give herself a gift.

Call it self-care or self-preservation, but Victoria knew what she wanted. Although she had been married for six years to a fantastic man, Victoria was not satisfied. She needed pussy.

Once at university, she had hooked up with a beautiful, older graduate student for a one-night stand. Ever since then, Victoria could not forget what it was like to have a female tongue lick her clit and kiss her passionately as they groped and teased each other’s breasts. She remembered their legs intertwining, scissoring until they both came.

But Victoria didn’t consider herself a lesbian. She liked men, and she married one. But a dick in her pussy no longer fulfilled her. She craved a woman. One late night while searching online, she discovered Chanel. Flowing blond hair, dreamy DD tits, a curvy ass, long lines, Victoria had to have her.

One call, and she was soon waiting for her dream woman to arrive.

Chanel arrived at Victoria’s door wearing a tuxedo with a lacy white bra peeking from underneath the starched shirt and red strappy high heel shoes. Victoria wore a pink sheer baby doll that seductively cupped her pert breasts and a matching mesh G-string. Earlier in the day, she indulged in a pedi and mani, and her pink polish matched her lingerie.

“Ready to have fun?” Chanel asked.

Chanel immediately sensed her apprehension, and she brushed Victoria’s short brown hair away from her face. Placing her lips on Victoria’s, she gave her a sweet peck but Victoria started passionately kissing Chanel. Victoria devoured Chanel, and Chanel’s hands explored Victoria’s tits, her nipples hardening immediately.

Wasting no time, Chanel stripped out of her tuxedo, bra and panties, revealing gorgeous DD tits and a shaved pussy.

“So you are,” Chanel whispered. “Get on the bed and let me devour you.”

Victoria wiggled out of her panties, and Chanel slipped Victoria’s lingerie off her shoulders and let it fall on the floor. Victoria spread her legs, revealing a wild bush, and Chanel buried her face into the lush wet pussy, zooming in on Victoria’s very ready throbbing clit. Her tongue swirled, and Victoria released a deep, primal groan that had been pent up for years.

“Fuck, yes, I’m on fire,” Victoria moaned, grasping her legs around Chanel’s back.

Chanel fingered Victoria’s pussy, hitting her G-spot and working her finger in concert with her tongue.

She thrust her pussy into Chanel’s face and bucked her hips wildly as one orgasm after another flooded her body.

“Here,” Victoria said, reaching over to the nightstand. “Take pictures of my pussy. I want to remember this.”

Chanel put the mobile phone between Victoria’s legs and licked her pussy, snapped a picture, licked again, snapped one more.

Chanel slid her legs between Victoria’s, and they kissed. Victoria felt as if she was floating in space, an out-of-body experience, as Chanel expertly rubbed her clit against Victoria’s and sucked her nipples. Victoria moaned, and suddenly felt a wave of wetness flooding the sheets. Chanel pushed Victoria down on the sheets and lapped up her pussy juice.

“You are delicious,” Chanel said, rolling out of the bed.

Victoria did as she was told as this tall, gorgeous sex goddess mesmerised her. Chanel pulled Victoria’s nipple and snapped on the clamp. Victoria whimpered.

“Want me to continue?” Chanel asked.

“Turn around and bend over,” Chanel said.

Moving her hand from the clamps to Victoria’s sensitive clit, Chanel rubbed Victoria vigorously until she gasped and collapsed on the bed. Victoria moaned deeply, and Channel pulled out, removing the clamps and butt plug. Victoria’s body burned with yearning.

“Time for you to pay me back,” Chanel said.

“You’re born to eat pussy,” Chanel said as Victoria made her come suddenly.

Victoria moved beside Chanel, and the pair intertwined their sweaty, lustful bodies and fervently kissed each other. Teasing Chanel’s nipples, Victoria leaned down and began sucking the large succulent nipples. She lightly teased Chanel’s curves, and Chanel closed her eyes, relishing the magical touch of Victoria’s fingers.

Victoria’s ultimate fantasy. She wasted no time getting in position to ravish Chanel, and Chanel consumed Victoria again. As Victoria lapped up Chanel, she knew that she would never be satisfied with her husband again. If she ever wanted a dick, she wanted it strapped on to a gorgeous woman with a tight pussy and voluptuous tits.

After Chanel, Victoria knew that she could lick a clit every day and be satisfied. Very satisfied.